Request Request Appointment Map Our Offices
OUR COMMITMENT TO SAFETY

Get to Know
Dr. Robert Tramel

Dr. Tramel has worked in private practice as a family dentist for nearly 40 years, and he does his best to remain on the cutting edge of the dental profession in order to deliver outstanding care to those in need. His patients are more than just patients to him – they’re his friends and family! If you would like to learn more about him, just keep reading below. 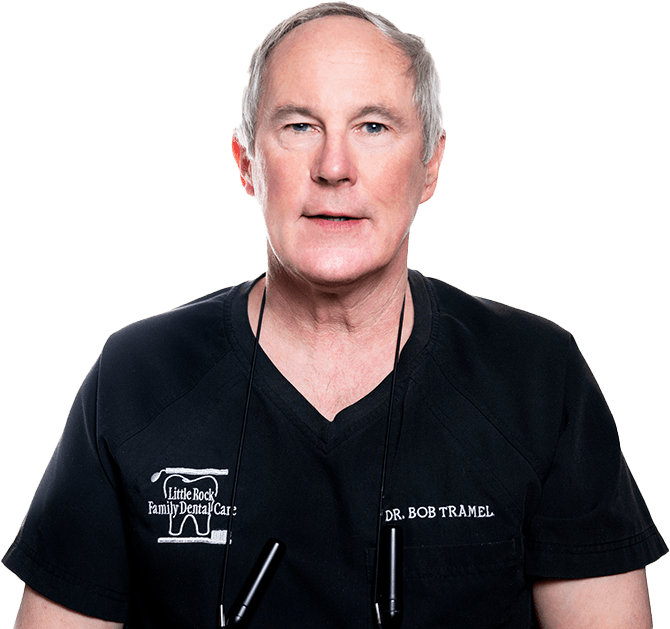 Why Did You Want to Become a Dentist?

Dr. Tramel decided to pursue dentistry as a career because he enjoys being around people and building relationships. Over the years, it has become a much richer and more diverse career than he could ever imagine! For instance, he has been able to travel all over the world and his own community in order to provide important dental services to underserved populations through Mission of Mercy, Little Rock’s Harmony Clinic, multiple Christian dental teams, and more. He couldn’t imagine doing anything else as his life’s work.

Where Did You Study Dentistry?

Dr. Tramel graduated from the University of Mississippi with his Bachelor of Science in Chemistry and Biology in 1977. From there, he pursued his Doctor of Dental Surgery at the University of Tennessee Center for Health Sciences College of Dentistry, completing the program in 1982. Today, he completed around 50 hours of continuing education every year, including extensive training in state-of-the-art CBCT technology, which allows their team to detect pathologies in the head and neck and virtually place dental implants for elevated accuracy.

Outside of the Dental Office, What Do You Like to Do?

At home, Dr. Tramel and his wife Kim have a Tuxedo cat named Max. When he isn’t busy caring for patients, he enjoys being an accomplished pilot of 42 years with an instrument, commercial, and glider rating! His other hobbies include traveling, mentoring young people who are interested in becoming dentists themselves, gardening, and studying languages – so far, speaks Spanish, Italian, Latin, and some French. He’s also a member of the International Churchill Society, which promotes all things regarding Winston S. Churchill.