Request Request Appointment Map Our Offices
OUR COMMITMENT TO SAFETY

Get to Know
Dr. Mark Murphy

A Little Rock native, Dr. Murphy merged his long-time solo practice with Little Rock Family Dental Care in 2014. Today, he enjoys providing all phases of family dentistry to patients in need, especially restorative work like dental crowns and bridges. He is also proud to work with such great colleagues and staff members who are all 100% dedicated to maintaining clinical excellence throughout each day! Keep reading below to learn more about him. 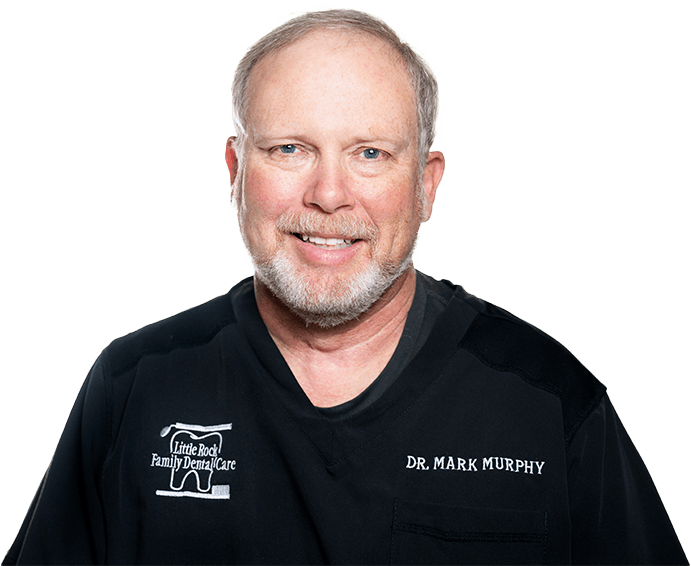 Why Did You Want to Become a Dentist?

Dr. Murphy decided late in high school that he wanted to either work in healthcare or attend law school, but it was difficult to choose a path. In his early college years, he visited his family dentist and orthodontist, who encouraged him to give dentistry a closer look. Later on, he took a course in dental anthropology, which helped to “seal the deal” as he really enjoyed it. Dentistry was also appealing to him because the doctor/patient relationships seemed so strong. He was very fortunate to be able to buy his family dentist’s office after graduating from dental school, and the rest is history.

Where Did You Study Dentistry?

After completing his undergraduate degree at the University of Arkansas at Fayetteville, Dr. Murphy pursued his Doctor of Dental Surgery at the University of Tennessee College of Dentistry in Memphis. Today, he always takes more than the required number of continuing education hours on a yearly basis to keep his skills sharp. He regularly attends the American Dental Association annual meeting as well, which features a plethora of education and networking opportunities.

Dr. Murphy also feels very fortunate to have worked part-time at the Arkansas Children’s Hospital Dental Clinic for over a decade, where he received invaluable experience regarding dental trauma in young children and teenagers. Some of his other accolades and distinctions include:

Outside of the Dental Office, What Do You Like to Do?

Dr. Murphy and his wife Candice met at the University of Arkansas in 1980 and have been married for over 35 years. She is the Computer Brain of the family with a BSHE degree, a BS degree in Management Information Systems, and a Master’s in Information Quality! They are very proud of their grown children Ross and Paige. Ross is an attorney while Paige works in the film/television industry and is pursuing her Master’s in Documentary Film.

Outside of working hours, Dr. Murphy enjoys traveling with his family, avidly following the Arkansas Razorbacks, watching movies, hiking, hunting, and going on boat rides. He is somewhat of a history buff as well (especially with topics related to Europe and the United States) and is always up for a trivia contest. One of his current great passions is bicycling. He tries to ride several times each week with friends and has participated in countless local and regional cycling events.